After dropping out of the ULSA holiday because of a cancelled flight I decided to bankrupt myself further by buying last minute flights to Switzerland for a week of canyoning. Becca and Julian agreed to give me a lift from the Swiss version of Hidden Earth (Sinterlaken).  Arriving at around midnight in the pouring rain […]

After dropping out of the ULSA holiday because of a cancelled flight I decided to bankrupt myself further by buying last minute flights to Switzerland for a week of canyoning. Becca and Julian agreed to give me a lift from the Swiss version of Hidden Earth (Sinterlaken).  Arriving at around midnight in the pouring rain I wandered into a school playing field and found Becca and Julian’s tent.

The next morning I was hoping to have a lie-in as Becca had left to go on a 10-hour caving trip. Unfortunately, Julian and I were woken up by the sound of swiss schoolchildren screaming ‘Hello, how are you?!?!’ from one of the classroom windows in every language they could think of – we were the last tent left in the field and it was a school day. So we packed everything up and looked for something to do, instead of having to spend the day wandering around Interlaken we struck gold. We had found a really fancy Swiss co-working space with free coffee and a robot lawnmower (for 20 CHF a day), we were thrilled and spent the whole day working on our laptops drinking coffee and watching the robot lawnmower while it rained outside.

Eventually, Becca arrived back from her caving trip and we drove out to Ticino to meet Wob, Lydia and Nadia. Over 30mm of rain fell on Tichino during our drive over, filling the canyons with an annoying amount of water. Because of the high water levels, we went to Barougia, Simon Flowers book described this canyon as a good one to do when everything else was too wet. The canyon was doable until we reached the 32 m pitch. Peering over the edge I could see a raging cauldron of water disappearing into a bunch of boulders and fallen trees.

Earlier in the week I realised I didn’t buy any travel insurance before leaving the UK, meaning that in the event of serious injury I’d need to pay for all the swiss medical expenses and repatriation costs, because of this I was too crippled by the fear of actual bankruptcy to continue with the rest of the trip and sacked it off. We descended the pitch a few days later after the water levels had dropped significantly, the water was still pretty powerful at the bottom, here’s a photo of Nadia enjoying herself in the canyon.

Now it turns out forgetting to buy travel insurance for a canyoning holiday can be a real headache. Most travel insurance companies won’t let you to buy travel insurance after leaving the UK as a fraud prevention measure. The ones that do stipulate that you need to be with a qualified canyoning guide for the insurance to be valid. The only sensible option I could find was really expensive (£128 for 7 days) insurance that offered canyoning personal accident cover so long as ‘personal protection equipment is used’, very different from the £35 for 7 days cover with Snowcard. But even so £128 was a bargain compared to any time spent in a swiss hospital without insurance, so that evening I put a big dent in my bank account, unfortunately, there was a 48 hour waiting period before the insurance activated so I just needed to be careful in the meantime.

On Thursday we went to Malvaglia inferior, in Si’s book it’s a 3-star canyon but definitely worth a visit because of its 12-meter toboggans, excellent views, fun jumps and interesting pitches. 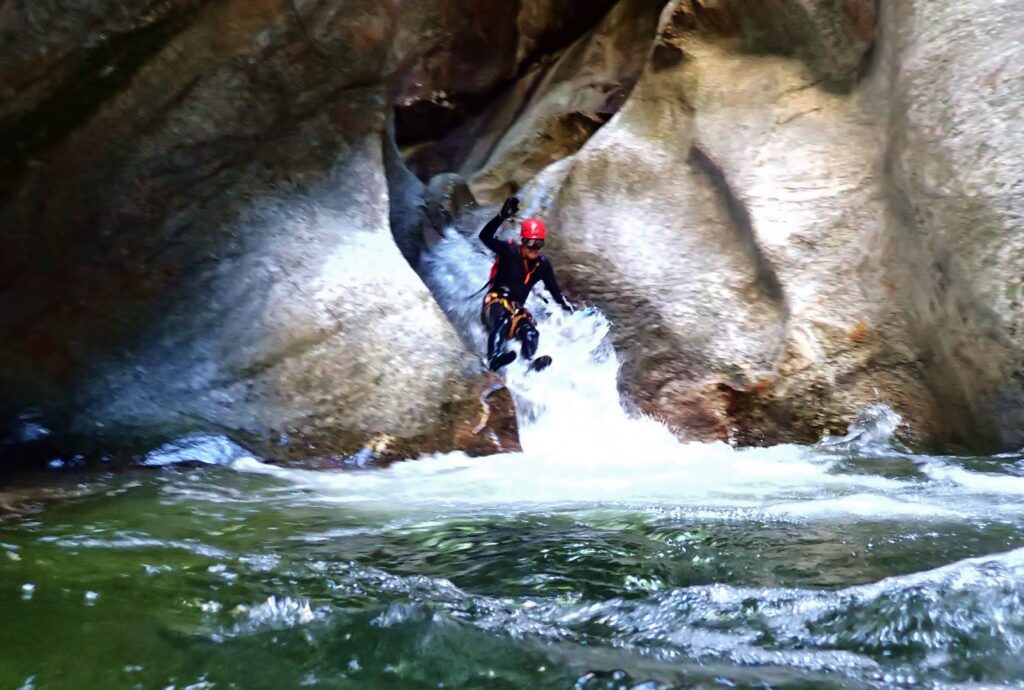 The canyons final pitch is an 80 m pitch split into two 40m pitches and a hanging rebelay to connect them. Wob went down the first section of the pitch but didn’t have enough rope to make it to the anchor, so I let out about 5 m of extra rope and tied off the releasable rebelay. We followed him down to the hanging rebelay and attempted to pull down the rope, it was stuck. 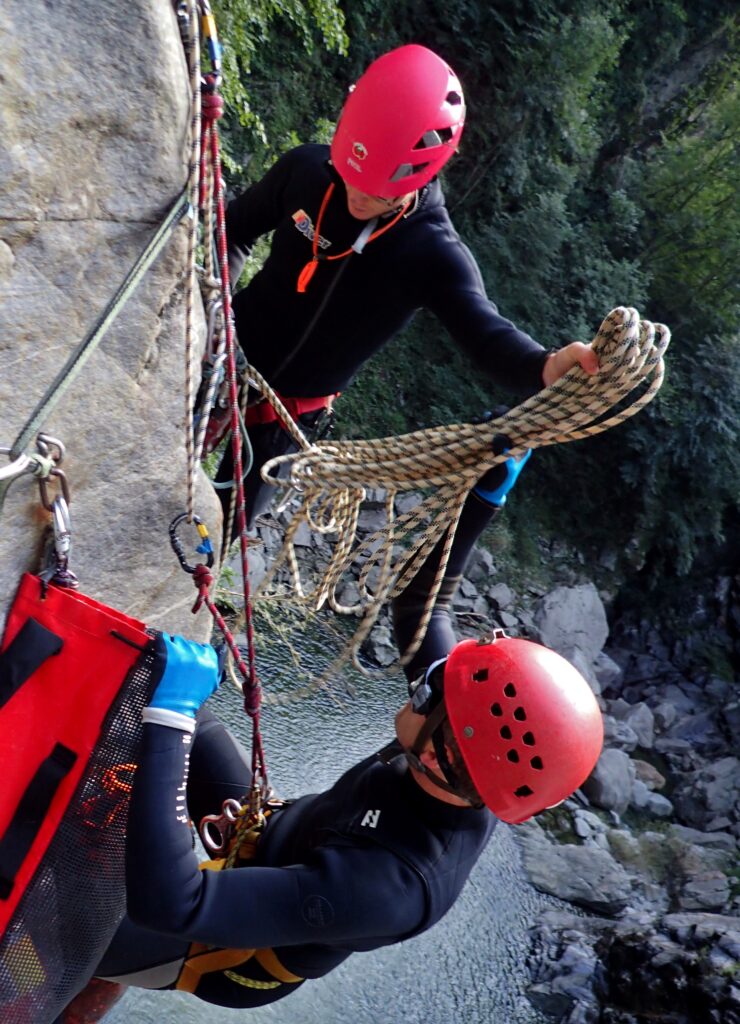 After about 5 minutes of whipping the rope and trying really hard to pull it down, we gave up. We only had enough rope to rig the next pitch as a single free hang so it was possible to escape the canyon but it would mean having to sacrifice 120m of rope + not have enough rope for the rest of the holiday. After a few moments of thinking, we decided I should prussic up the pitch and attempt to free the stuck rope. At the top of the pitch, I saw what was wrong, when I tied off the releasable rebelay I threaded the rope through the anchor as well as the fig 8 making it impossible to pull the rope down, I replaced the releasable rebelay with a biner blocker and descended the pitch.

About halfway down I realised I had rigged the pitch the other way around and descended on the side of the rope with another rope tided to it meaning I’d have to pass over a knot to get to the bottom. To make life easier I positioned myself on a ledge and swapped my descender onto the other rope, but before leaning back realised this wouldn’t work because the knot wouldn’t pass through the anchor when we later attempted to retrieve the rope. I swapped back onto my jammers to head back up the rope, but on the first step the rope gave way, this was because I had swapped onto the side of the rope which wasn’t secured with a biner blocker. Regaining my balance I swapped back to the safe side of the rope to once again acceded the pitch. After putting the biner blocker on the right side of the rope I descended the pitch to meet a very confused Wob and Julian before continuing with the rest of the pitch.

The next day (Friday) with 7 hours left until my insurance kicked in Julian, Wob and I headed out to Cresciano superior, this was one of the longer (~6 hours) and prettier trips in Ticino but involved a 2-3 hour sweaty hike up a hill. Becca and Nadia kindly drove us out some of the way. We reached the start of the canyon when we arrived at a random metal helipad, turns out if you’re rich you catch a ride in a helicopter and avoid the sweaty hike up the hill in underwear. 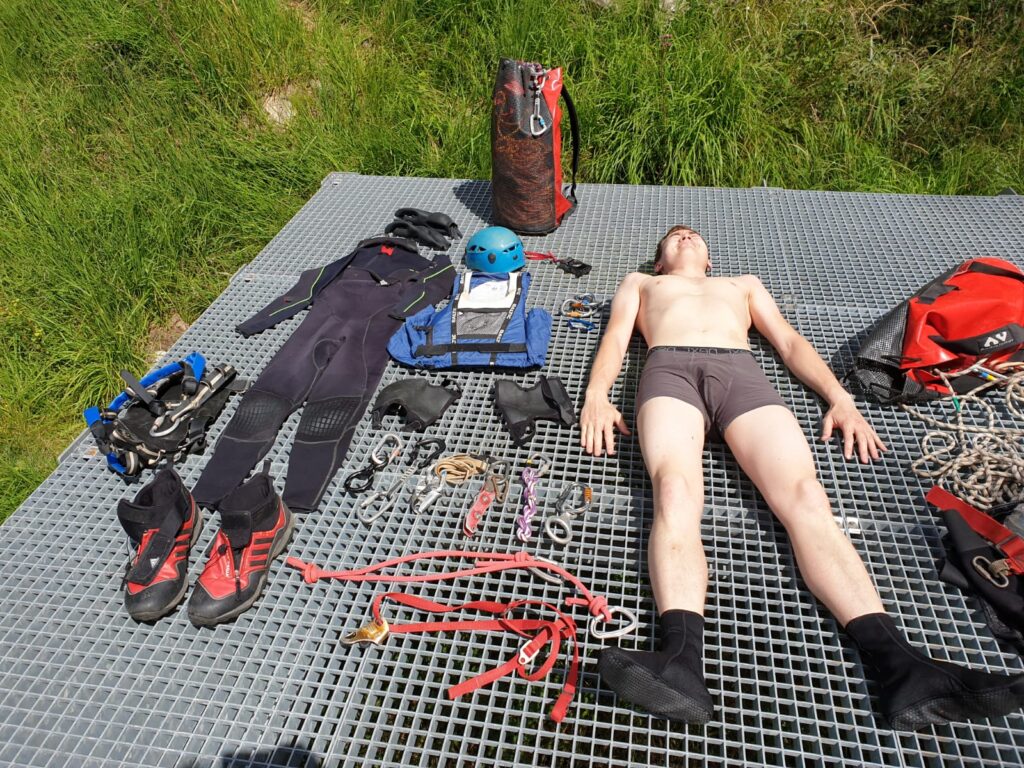 For anyone wondering what to wear while canyoning here’s a comprehensive list: 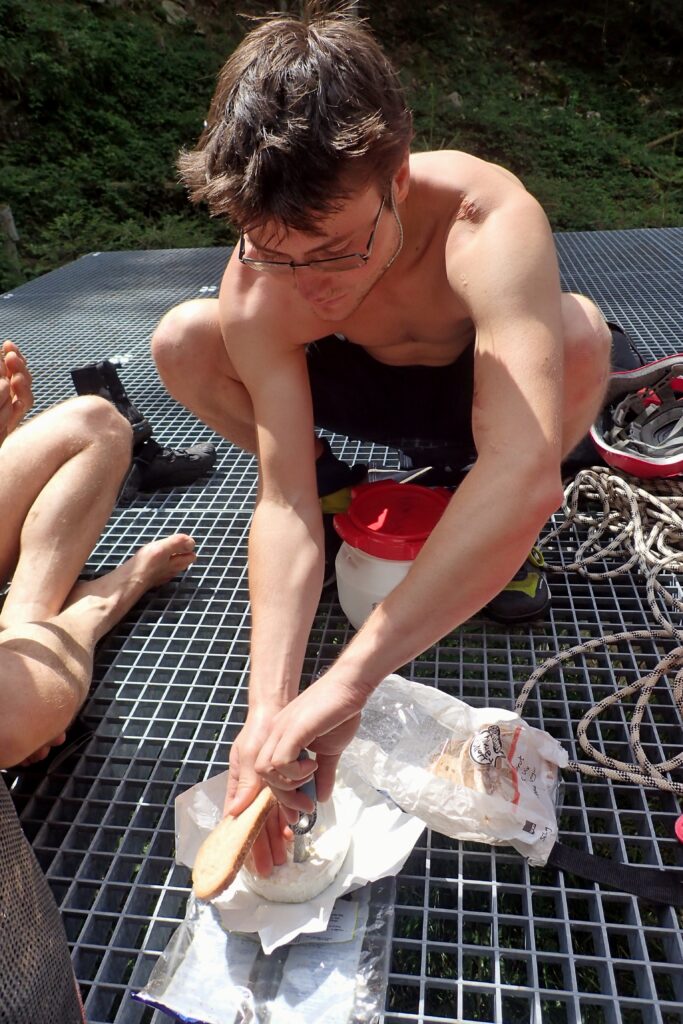 After kitting up and having lunch on the helipad we set off into the canyon, about 4 pitches into the canyon the cheap decathlon rope we were using cored in 3 places, Wob noticed this halfway down a pitch and decided to take his chances, I was really looking forward to having valid insurance. 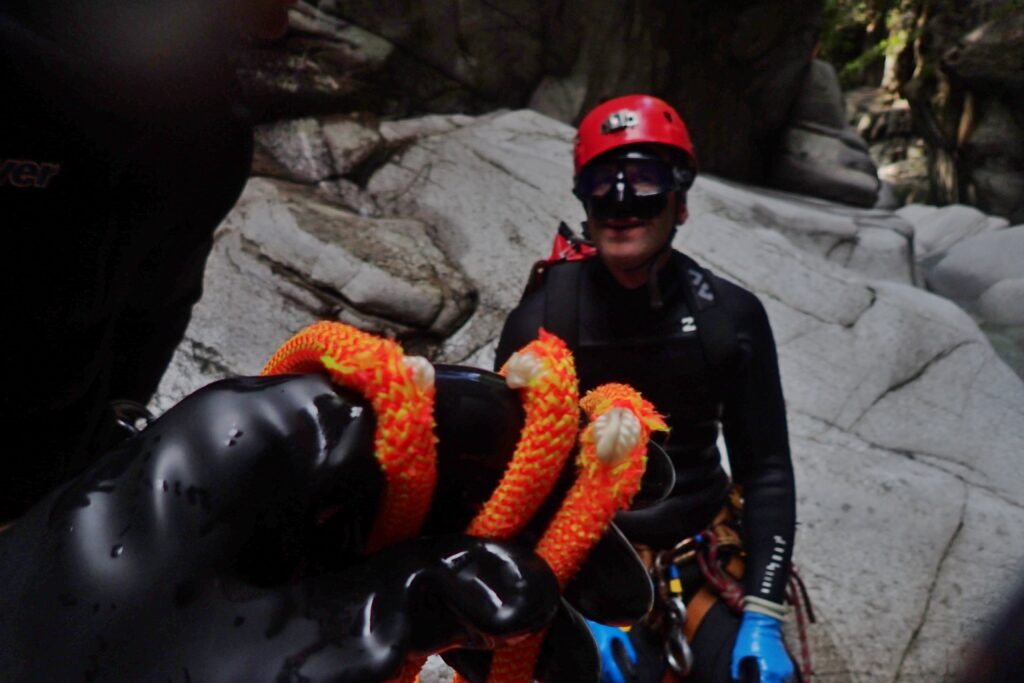 Crechiano superior is quite long but is made up mostly of small and easy climbs, jumps and toboggans. The canyon was overwhelming pretty, the nicely sculpted rock was complemented with clear deep blue pools, on closer inspection the rock was glittering with the mineral mica. My ability to enjoy the canyon increased the closer we got to 6 pm when my insurance finally activated. I’d highly recommended Cresciano superior to anyone canyoning in the area with enough energy/money to make it to the start.

On the final day, we did Iragna inferior, here we met some very smiley german canyoners with lots of shiny expensive kit. It was useful watching them go first as they showed us where a lot of the jumps and toboggans were (there are a lot of jumps in this canyon). Not recommended after wet weather, there are sections I can see easily becoming quite dangerous. Apparently, this was the germans second trip after bailing on a previous where they almost became stuck at the bottom of a waterfall.

Now I had insurance nothing bad could happen so I went down most of the dodgy looking pitches first to check they weren’t too deathly. Simon flowers book is really confusing for this canyon, the rigging topo for the middle section didn’t seem to match the canyon at all, definitely worth bringing a set of jammers/rigging releasable rebelays if you visit this canyon.

Towards the end of the canyon, we reached an awesome toboggan where a powerful jet of water threw you around a corner and into a pool. Becca went first and emerged at the bottom shouting at us and pointing at her knee (the universal ‘the waters knee-deep’ signal). Julian went next trying to resist the force of the water turning upsidedown in the process, he eventually made it to where Becca was and I went next. It turns out Becca was trying to tell us it was a toboggan and that she hit her knee on something on the way down, Wob was gutted he did it with a rope.

No canyoning holiday would be complete without an obligatory canyoning video, this was shot with an Olympus TG-4 kindly lent to me by Luke Stangroom, most of the shots were handheld while I was trying really hard not to drop the camera.

It was the final night and we had a lot of food/beer to use up. Julian was in charge of cooking and decided to cook ‘random’ we chopped up vegetables for him and he seemed to decide what to do with them only after we passed them to him.

After dinner the boozing began, Lydia and I spent the evening discussing how we were going to build the commune after the imminent and inevitable collapse of society. Unfortunately, no-one we could think of quite matched our requirements for supreme commune leader, although at the time of writing I propose Rachel Turnbull as strategic commune planner, judge, jury and executioner.